Welcome to the Devlogs

As this is the first devlog, let’s set some goals. I want to have more visibility into my design process, playtest results, and progress on new iterations. Each post will focus on one of those goals, but should always provide some insight into what's next. In this post, you’ll find a play report and thoughts on character creation for one-shots. 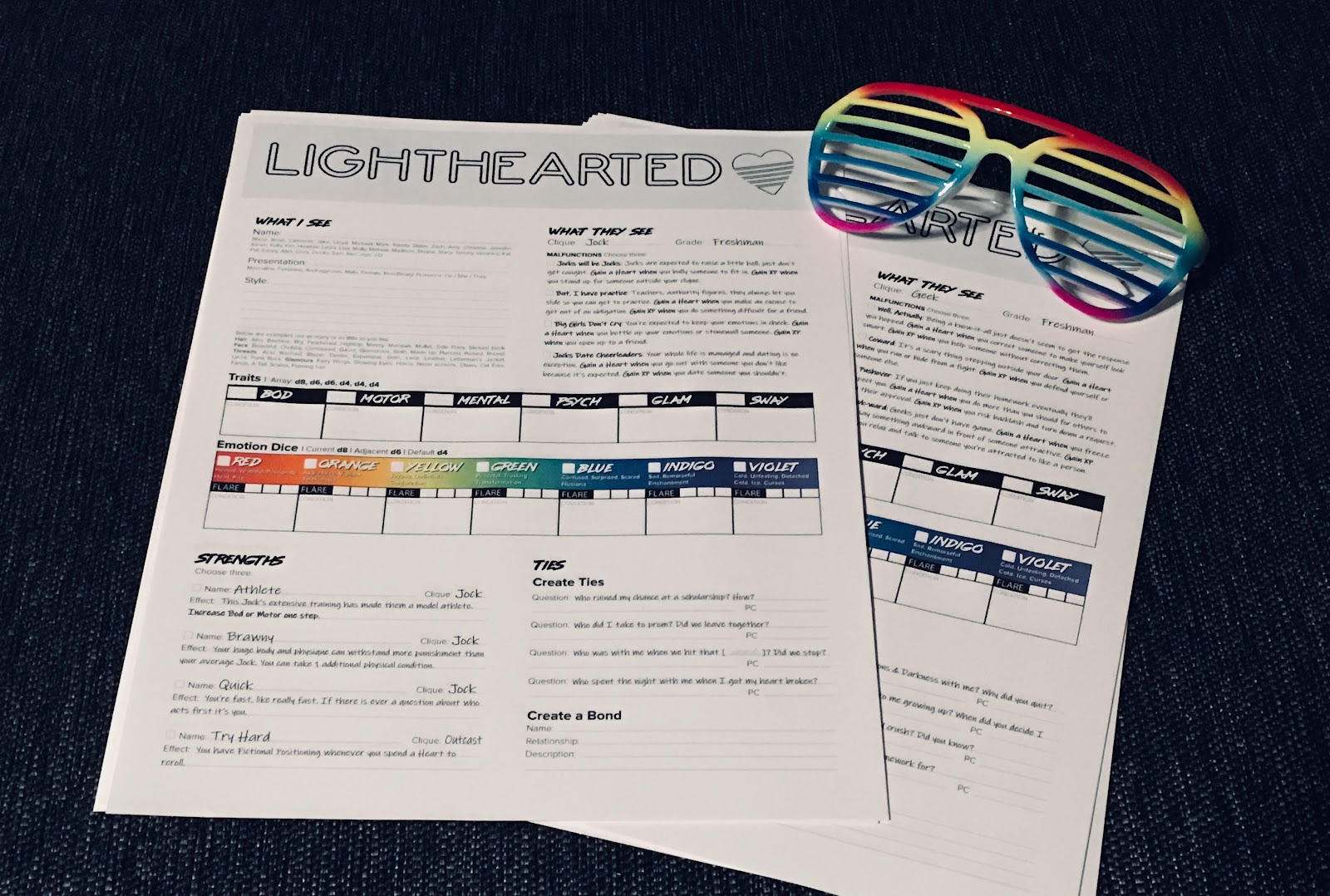 Character sheets created for the con

This weekend I got to run two sessions of Lighthearted at Strategicon’s Gateway 2019 convention. I ran both sessions in Games on Demand so they were quite different experiences. My Players were all great and had insightful feedback at the end of each session. If you’re in the Los Angeles area this con happens three times a year and I highly recommend it.

Photo by Tomer Gurantz of the first session Mustang Fairy

We got a little bit of a late start with three players then had two more players trickle in. That, coupled with the setting requiring some explanation, meant we didn’t finish character creation until two hours into the time slot. Normally it takes about an hour. We’ll look at some ways to speed up character creation as we go.

Because we had 5 players we got to see all 5 cliques in action. It didn’t take too long for them to come up with names and styles. They missed the glamour suggestions under style so none of them had fairy wings or horns, but they were all totally 80s. Our Prep was basically Steff Mckee from Pretty in Pink, but with a ‘66 cherry red mustang. Our Outcast was into hip hop and techno which was a new direction for that clique. All the Malfunctions, Traits, and Strengths took some time, but it was the Ties where things really slowed down. It took about 40 minutes for five players to go around the table forming relationships and getting to know each other. In future games, I’ll try to limit the number of Strengths and Malfunctions presented so we can devote the majority of time to getting to know the characters.

Something interesting happened when the jock was struggling with one of their ties. The tie in question, suggests that the jock and another character hit an animal with their car, then asks if they stopped. This is one of the ties that gets skipped or edited a lot. I suggested that instead of an animal it could be a Lightborn. Lightborn are magical creatures with positive reputations like Fairies and Unicorns. The whole table lit up at this because up to that point there hadn’t been much magic in their descriptions. It added something I didn’t realize was missing. That Fairy they ran over ended up being our antagonist for the game.

Because we had spent so much time already, instead of having each player create a Bond. We created one Bond as a group that they all shared. Each player added one thing until we knew who she was. Susie was a math professor obsessed with proving fairies were real.

With that, we had enough to get started. We opened with all the characters walking down the street at midnight after a party when their Bond, Susie, goes running past. They get her attention just in time to hear the distinctive sound of the Prep’s mustang rev up and take off. Susie says a fairy princess is on a spree and she has a tracker of sorts. A blue shard she found by the side of the road (where the Jock and Prep ran over a magical creature).

There was a moment where they all realized that was the only car nearby that they owned. Susie runs over to a car on the street and looks for a way to break in. The Rebel steps in and offers to break into the car. They get something like a 17 on a d4 because their die exploded so many times. In the game that is Great Effect so the car has those big bench seats with room for all six of them and the keys are in it.

This is where we got to try out the Montage. In Lighthearted when you want to gather information, have a makeover or go on a car chase we do it in a montage. Each player got to describe something we saw along the way. They ran red lights, blew by some cops, and came upon a bridge raising. The Rebel was leading the action so they got to roll for the chase and see how it went. Again they blew up their dice so many times I just handed them the keys, so to speak, and had them tell me what happened.

They jumped the bridge and the mustang they were following leaving themselves free of the cops and in a perfect position to stop the car thief. I tell the Jock and Prep that the see the same lightning blue eyes from that night when they hit something. The Outcast decides to use some magic to open the doors of the mustang, but botches the roll. I let it open the door, but the fairy in the car sends the spell back at them, giving them the condition Undone. Now no fasteners on their body will stay closed. The Geek decides to hide under the dash with Susie. The Jock gets out of the car and threatens the fairy, but they get a mixed result. I give them the choice between upsetting the fairy, but their friends will know they’re scared or keeping their cool but the fairy doesn’t seem phased. They decide to keep it cool.

Then the rebel gets out of the car and starts taunting the fairy. Again the rebel’s dice are on fire and they inflict a condition on the fairy. The Prep decides to suck up to the fairy saying they both have good taste and to please give their very nice car back. She offers to give the car back if the Prep will teach the Jock a lesson for threatening her.

We cut back to the Outcast who isn’t where they should be, then the camera pans and we see them running away down the street trying to hold their pants up. The Geek and Susie are discussing how to trap the fairy with a pentagram. They decide to sneak off and find the Outcast to make a giant trap for this fairy.

The Jock, not pleased with the goings-on decides to grab a bat out of the car and take it out of the fairy’s solar plexus. They inflict another condition on the fairy and they are doubled over gasping. We cut back to the Geek, Susie, and Outcast to see how they are doing on the trap. They roll well enough that this thing will be trapped if it comes around the car. The Prep decides to turn their flattery into a barrage of insults which they do expertly, causing another condition that will take the fairy out of the scene. We see the fairy walk around the door ready to do some violence to the Jock, just as the rebel is running up to deck her. She hits the center of the trap just as the rebels fist connects laying her out.

Everyone is congratulating themselves when the bridge starts coming down and the sound of sirens is suddenly a lot more relevant. They scramble to get everyone into the mustang and the Prep even risks getting caught to wait for everyone. Except Susie, who they can see inspecting the fairy in the rear-view before she gets arrested.

It was a short game due to our long character creation, but everyone had a good time.

Follow me to get notified when I post the next devlog a play report of the second session Pixie Rescue at the Mall.

Lighthearted is a roleplaying game of 80s nostalgia, neon, & magic.