Where can you buy Lighthearted?

Thank you to all of our wonderful early access supporters for helping us get to this point! We have disabled new sales for the time being. If you purchased the early access version of Lighthearted you can still download the most up-to-date files by clicking download on the banner above or from your Library.

To stay up to date on future Lighthearted releases, head to lighthearted.games

Welcome to the magical 80s dream world of Lighthearted. You are a Prep, Jock, Geek, Rebel, or Outcast, like those kids in The Breakfast Club, except you are just about to start magic community college. Through play, we'll explore how you grow out of your high school cliques all while dealing with magical mishaps, college parties, vampires, and worse finals!

Lighthearted is a complete tabletop roleplaying game that uses the language of film and television to reimagine the coming of age stories popular in 80s teen movies like Weird Science and Sixteen Candles, but with a modern fantasy spin. It's set in an alternate 1980s with fantasy elements weaved into the most outlandish bits of 80’s pop culture. There are fantasy religions mixed in with mall culture, dark magic cold wars, and magical glamours instead of plastic surgery.

How does it play?

Lighthearted plays out like a movie or tv show, setting scenes by describing the lighting, camera angles, and soundtrack then playing through the action and dialog.

The game utilizes an original system, but draws inspiration from Savage Worlds and Powered by the Apocalypse games. The system focuses on the balance between the character’s motivation and their emotional struggle at any given moment, helping to create both external and internal conflict within the game.

To help players tell their coming of age story, and help their characters overcome society's expectations for who they'll become, Lighthearted uses a system called Malfunctions.

The game uses a roll and keep die mechanic. You roll a Trait die and an Emotion die and keep whichever is higher. Traits are determined at character creation and represent the character's physical, mental, and social attributes. Emotions change over the course of a scene to represent how the character's actions affect their emotional state. This brings the character's emotions to the forefront of the player's minds and affects how they approach their goals.

Familiar with Savage Worlds? Trait dice function similar to skills, and the Emotion dice function like a variable wild die. You'll also find an exploding die mechanic to add a little excitement to every roll.

Familiar with PbtA games? This works like the banded success you are already used to where you can succeed, succeed at a cost, or fail.

Music is an important part of setting scenes in Lighthearted. To help with that we've put together a Spotify playlist of some of our favorite 80s songs to accompany your games.

What Are People Saying?

"If you are looking for an RPG that will hit the notes of nostalgia while still opening up a fantastic world for you to play in and discover, you can’t do much better than Lighthearted."

"Lighthearted does one of the best things an RPG can do: it takes an anchored, cultural touchstone as a way to get players engaged and then gets weird with it. It's a love letter To All the Movies you've Loved Before, that you wish you could rewrite in a less awful way. Also magic."

Kurt and Kate have been playing RPGs together for 10+ years and married for more than that. Kurt started working on Lighthearted in 2018, but as is common in this type of partnership Kate's influence was always present. She came on as an official co-author in mid 2019. Kate's work as a marriage and family therapist has been instrumental in creating a game about emotions & growing up in a lighthearted way.

The wonderful Minerva Fox created all the beautiful character art you've seen on this page as well as the yet to be released cover. She's worked on many RPG books including Demigods PBTA, Hearts of Wulin, and Vigor. We're so excited to be working with her on this project and can't wait to show you more.

This game is currently unavailable 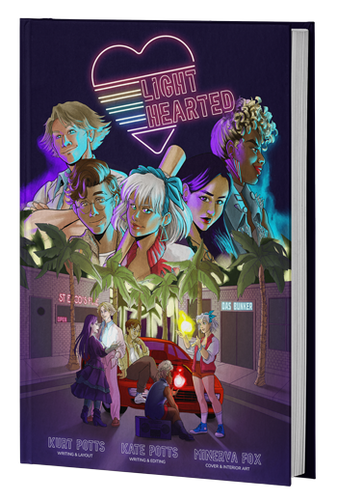 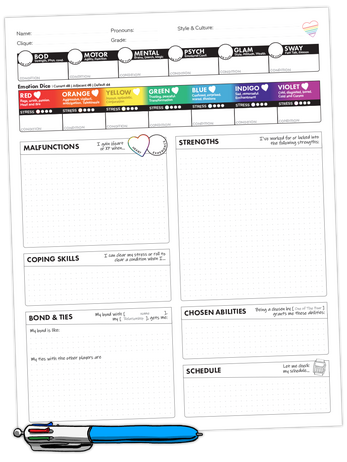